The New York Times, Glamour Magazine, Good Housekeeping, and others have recently posted stories about climate anxiety. Pew Research Center found 51% of social media users said they felt anxious about the future after viewing climate content. That number goes up to 59% for millennials and 69% for Gen-Z. I have read about therapists learning how to discuss climate change with their patients, climate change influencers hearing that their fans feel anxious, and all climate communicators struggling to portray climate change accurately without spurring this anxiety?

First off, to those who haven’t heard the term “climate anxiety,” I know it may sound silly. From reading both psychologists’ writing and individual experiences, I can assure you that it is a real thing, and not “our generation being too sensitive” or what have you. Climate change affects everyone, but for young people, it will be our entire life. All we will know is devastating hurricanes, wildfires, heat waves, droughts, food shortages, water shortages, health impacts, justice impacts, economic impacts, etc. Of course that affects where we live, where we work, if we have children, and so many other facets of our lives. That’s a lot of stress, and that’s why there’s a term devoted specifically to it. I understand that millennials and Gen-Z have become much more vocal and open about mental health than past generations, and that openness can be jarring. Keep in mind that the goal of discussing climate anxiety is not just to validate it, but to figure out how to communicate climate change better. That same Pew Research Center poll found 54% of Gen-Z and 53% of millennials are motivated to learn more about climate change. That’s a majority, but a much smaller group than those who reported anxiety, meaning many people are actually disengaging. That’s my fear: in addition to feeling empathy for anyone who’s anxious, I am concerned that climate anxiety could actually cause young people to avoid climate topics. 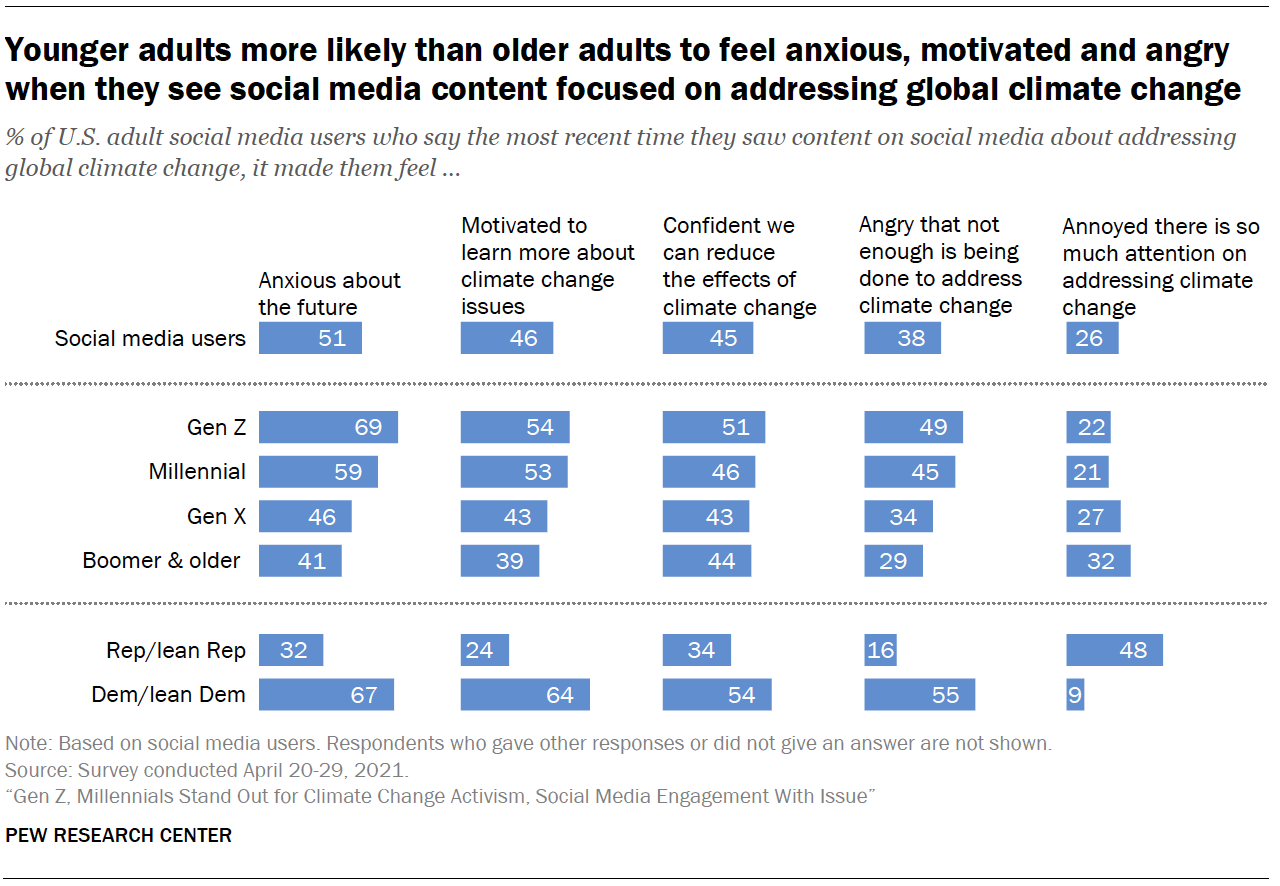 But how could communicators make climate change less overwhelming without lying? In fact, many people are understating the dangers of climate change! Though often presented as a future problem for our children and grandchildren, climate change is here right now. We see its effects all around us. Moreover, even if we eliminated all carbon emissions today (which we won’t), there would still be carbon dioxide in the atmosphere for at least the next century continuing to absorb solar radiation and warm the planet. And after the latest research on the Thwaites glacier came out in December, we learned sea level rise will far exceed our worst-case scenario projections. How can one be less overwhelming while clearly stating all these facts?

At The Sweaty Penguin, we have a few strategies. We separate out the problems/facts/science from the solutions/opinions/policies so our audience doesn’t have to be stressed about politics while first learning about an issue. When we do talk policy, we offer a variety of options and discuss the pros and cons so our audience can decide which ideas they like and don’t like, ensuring the solution won’t be worse than the problem. And we use humor to help explain concepts and break up any stressful information.

There are many other strategies too. The Sweaty Penguin wouldn’t do this as a news organization, but activists often encourage their supporters to take action, be it voting or starting an initiative in their own community. I recently wrote a piece with some ideas for individual actions that can spark community-level change. For some people, feeling empowered can reduce anxiety.

Before any of this, however, I want to propose one very important reframing that, for me, was all it took to calm down. This isn’t a communication style or a proposed solution, but an actual fact about climate change that, in my experience, goes unsaid far too often.

Again, climate change is here right now. When I see phrases like “fix climate change” or “stop climate change,” I immediately get overwhelmed because that’s simply not possible. We are already over a degree Celsius warmer than preindustrial times, and that number will increase no matter what. To set the goal of “fixing climate change” is just not feasible.

But what if our goal were to get climate change under control? Technically, that’s what world leaders have done with the 1.5°C budget in the Paris Agreement. Seven years later, we are nowhere near on track to meet that goal, and even the emissions reductions outlined in the Paris Agreement would not contain climate change to 1.5°C, so there’s plenty to criticize, but at least it is a scientifically plausible goal. We could debate if there is a better number, or if the number even matters as much as just doing something. Maybe we try cutting global emissions in half by 2030 and regrouping then, for example. But whatever that goal is, I believe it could be far less stressful than the idea of “fixing climate change.”

What about our future? Aren’t we screwed if we don’t “fix climate change?” Maybe a little bit, but no. We can’t eliminate the impacts of climate change. But we can keep them from worsening significantly, and we can learn to adapt to them. Remember, we’re living in a changed climate right now, and even though we’re facing many issues as a result, humanity has not gone extinct. It’s worth discussing how to better handle the impacts of climate change and prepare for them ahead of time, but that’s a separate conversation. We could—and I expect we will—adapt, assuming we meet our attainable goal and don’t let climate change get too out of hand.

There’s no easy way to talk about climate change, but I believe this reframing is absolutely essential to any conversation. It injects hope without sugar-coating. I don’t expect it to single handedly eliminate climate anxiety nor should it, but I hope climate communicators can use it to contextualize their content. To me, an attainable goal is much less stressful than a pie-in-the-sky one.

0
Ethan is a recent graduate of Boston University from Bethel, Connecticut with a dual degree in Environmental Analysis & Policy and Film & Television.